Like Gemma, I’ve been sucked into the recent notion of “100 happy days”, despite my tough exterior, I do sometimes have some pretty rubbish days so it’s been nice to remind myself of how lucky I am and of all the nice things I have in my life. Since I missed out on my 1-10 post, here’s my 1-20 of #100happydays: 1. I absolutely love Lilies – they are my favorite flower, so when I let the pooch out in the morning, the first thing I noticed was that the first of my many Lilies had opened.

2. Thursday’s are mostly reserved for Yoga – the beauty of self-employment is that I can go to the gym and take classes during the day now, which motivates me a lot more than when I dragged my sorry behind to Body Combat on a Monday after an 8 hour shift.

3. Gem and I recently signed up for 3 issues of Cosmopolitan for £3 so we could grab ourselves a bargain and received a free L’Occitane Cherry Blossom shower gel and body lotion set and behold the postman doth deliver!

4. My nail varnish collection has been getting out of hand and instead of being able to actually see which colour I wanted, I just picked from the edge of my precariously placed pile, so that I wouldn’t knock them all over. Anyway, I told my partner Brains that I wanted to make a nail varnish shelf and the same day we ended up in Wicked buying wood. This is the finished version, with space enough for a few more! My tutorial on this will be coming soon. 5. Despite doing a very stupid thing and trying out Body Pump on the Friday, a very achey and sore Gem and I, jogged our way around the Race for Life track on the Sunday. We’d raised a fair chunk of money for a great cause, and although we didn’t do as well as we’d hoped we still beat our previous time!

6. Last year I grew chillies in the conservatory and I’ve been caring for my plant very tenderly over the Winter. All that love has now paid off, because I have a bountiful crop that I used in one of my lovely slow cooked Vegan Chilli – I love being able to pop into the conservatory or garden to procure a few herbs.

7. Working from home means we have time to lavish our pooch CJ with all the love and attention she deserves. On this day, she interrupted some important coding to give me some kisses – and presenting me with the cutest face.

8. CJ was 14 around the 1st July and apart from the two years I spent in my old house away from her, as my house mate had allergies and I had to leave her with my mum, when Brains and I were looking for our own house we planned to take her with us. Our new landlords reluctantly let us have her and it was worth the wait – seeing how much she loves Brains is so amazing, in fact she often clambers over me just to get to him she’s that besotted. 9. I love cooking and so I’d preparing some lovely Vegan Chicken and Stuffing to take on our picnic the following day. It’s been ages since I’ve had such a treat.

10. Gem asked me what I was wearing on the day of our trip to Stonehenge and Glastonbury – I had to send her a picture just to make sure we weren’t wearing the same outfit. Having a best friend like Gem is kind of like having a louder more boisterous version of me – we spend so much time with each other that we often accidentally wear the same outfits, take the same makeup to places and have the ability to read each others minds and finish each others sentences.

11. I effortlessly took my behind up to Glastonbury tor and it was so lovely just sitting up there and admiring the views. The last time Gem and I went up the tor, we were very unfit, so all of those gym sessions have paid off!

12. There’s nothing I love better than a beautiful crisp salad on a hot day. Since Brains was in Northampton, I rustled up a gorgeous Harissa seasoned Vegetarian Butcher Chicken, Shallot, Mushroom, Olive and Romaine Lettuce salad. 13. You may have picked up on the fact that I am obsessed with Giraffes – as Gem is obsessed with Zebras, well Gem picked this up for me as a little present as we often buy random things for each other. It’s the cutest addition to my massive collection.

14. Never underestimate the pure joy of taking a nice cup of tea to bed after a hard days work. Okay, I say hard days work, this was my post “managing to fit all of our clothes, makeup, toiletries, airbed and duvet into one suitcase” victory cup of tea, when I’d finally finished packing for Brains and I to go to Graspop.

15. We left for Graspop at about 12.30am as our ferry from Dover was about 6am. I therefore took advantage of a few hours lying on a proper bed, watching some TV, with Brains and CJ.

16. Crabbies on the ferry in the early hours of the morning. This was the ultimate symbol of holidays. Also, I shared this with Brains to avoid the 300+ calories per bottle. 17. We finally arrived in Belgium for the Graspop Metal Meeting festival. I was pretty dubious about drinking the draft beer though because I didn’t know if Jupiler was Vegetarian. Anyway, I took a risk and drank spent the weekend drinking Hoegaarden Roséé  for the whole weekend. It was a beautifully refreshing raspberry beer, I didn’t wake up with a nasty hangover and I didn’t feel bloated and gassy because I’d been drinking beer. Winning all round.

18. I’ll be the first to admit that I’m pretty rubbish at discovering new bands at festival’s these days. I used to thrive off watching all the bands I hadn’t heard before in my youth, but this kind of stopped over the years and I became lazy, old and more interested in sitting in the beer garden or the tent. Well Brains and I purposely went to see Civil War based on them being described as “If you like Sabaton, you’ll like these guys”. Very glad that we got off our butts to see them so early in the morning because we thoroughly enjoyed them. I mean, they weren’t the best band in the world but I’ll definitely add them to my playlist and go and see them again.

19. The last day of the festival meant we had no food left, which was wonderful news because it meant we didn’t have to carry it back to the car. So I found the Vegan and Vegetarian stand. Brains had a “kebab” made with Veggie kebab meat and I had sweet and sour noodles with some tofu and vegetables. We were absolutely stuffed afterwards!

20. This was the day we came home from Graspop, but I still had a few things to be happy about – finding the Milka version of a kit kat, picking up some Jupiler beer for my brother who kindly house sat to look after CJ whilst we were gone, the ferry having a Starbucks and the lady actually asked me if my name was ‘ie’ or a ‘y’. This never happens – people usually just put “Amy”, and returning to the wonderful English weather! Did I mention that the ferry was packed full of O.P.I, benefit, nails inc, dior and many other delightful brands that I wanted? And did I also mention that I didn’t buy a single thing? I was pretty proud of myself for that!

So those were my first 20 days of #100happydays. Have you been doing this? If so, we’d love to see some of your pics. You can also follow me on instagram via amie_dakesis to keep up with my daily posts and you can follow Gemma via gemma_dakesis. Gem’s #100happydays part 1 and #100happydays part 2 posts are also available.

Totally hellbent for reminding myself how lucky I am 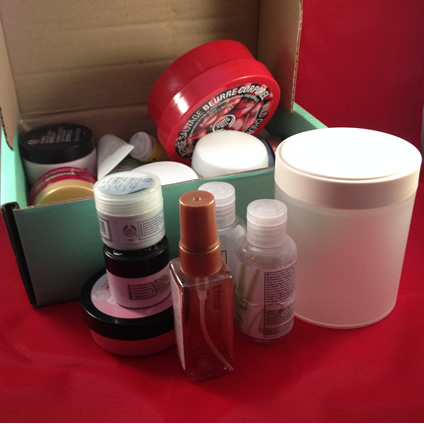