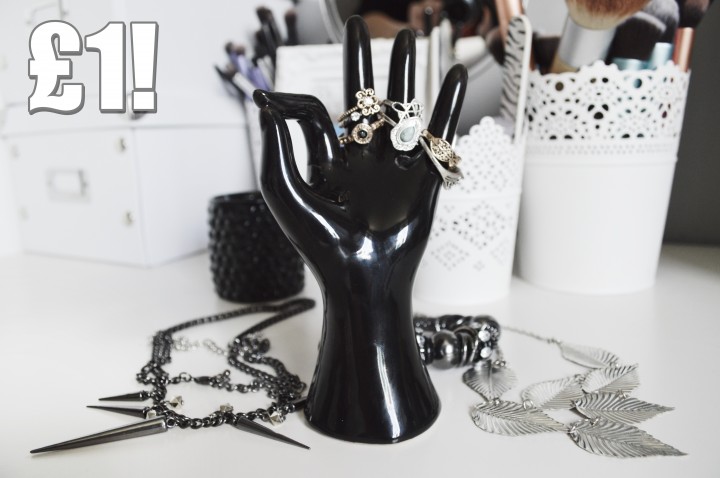 I love a bargain and on any given shopping trip simply cannot resist a browse around all and any pound shops in the  nearby vicinity. I was aware that Poundland (the undisputed king of all pound shops!) had launched a jewellery range last year sometime, but I’ve never really seen many things that much grabbed my interest. A lot of it looked cheap and nearly all of the pieces in my local stores were gold toned and thus of absolutely zero interest to me, but on our last little foray I spotted quite a few little treasures that I just have to share with you.

First up is the glorious ring holder, now I’ll make a confession right away that the rings on display are actually from Primark, but nevermind that because HELLO FABULOUS RING HOLDER. The hand is made of ceramic and even though I’ve already dropped it twice (oops!) it’s still without any chips or marks. I’d probably have paid quite a lot more than £1 this because it’s frankly amazing. It also comes in white, but as I’m going for a monochrome theme rather than succumbing to all the blogger stereotypes (yeah just ignore those white IKEA brush holders okay???) and buying absolutely everything in white I went for the black one. I’ve seen this in gold about a million times, but I just cannot pull of gold toned jewellery against my skintone so I resisted despite the fact that I adore any sort of trinket and treasure that has leaves or trees on it. Well now it comes in silver so problem solved. This feels the most fragile of the pieces I picked up, but I don’t think I can do that much damage to it just wearing it around my neck…right? Okay so it’s not actually called that (none of the pieces are named because this is Poundland we are talking about here people) but it is made of black metal and it is spikey and pointy so the name is perfectly chosen! This is the sort of necklace I see and instantly fall in love with, making me willing to part with any amount of cash to make it my own. I’ll be putting this swiftly in my mounting “Festival Accessories That I Can Wear Drunk In A Field And Not Have To Care About Loosing Or Breaking” pile. This is actually the second time I’ve bought this bracelet, which doesn’t initially say much for the longevity of delightful but cheap Poundland jewellery, however I did wear the old one every day for about six months before the band itself started to get loose and eventually one of the clasps broke. I always got a lot of compliments on this bracelet and became very confused and bewildered when I had to accessorize myself without it. Well now it’s back, and even if I only get another six months out of this one it will be worth every one of the hundred pennies it cost.

So there you have it, four pound well spent in my humble opinion. Have you tried any of the Poundland jewellery, and what do you think of the quality for such a low price?