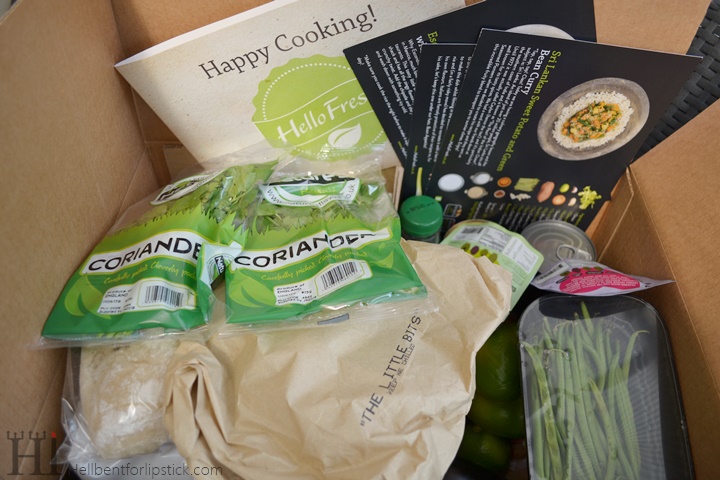 Many beauty boxes ago I received a £25 off voucher for Hello Fresh – a box that delivers you all the ingredients you need to make deliciously tasty meals. It’s been sat in the craft room for a long time until I came across it a week or so ago and decided to try it out. The boxes are usually £36 for three meals for two people. With my voucher, this meant I managed to get this for just £11, a price I felt was worth trying since that’s what I would generally spend if I popped to Tesco’s to “pick something up for tea”.

Intrigued as to what Hello fresh was all about, I ordered my first box on the Thursday that was scheduled to arrive the following Tuesday. There are a variety of boxes to suit everyone (although sadly no exclusive Vegan box as yet) and you can choose whether your box is for 2, 4 or 6 people.

I went for the Veggie Box for 2 people which included three meals. Delivery was prompt, early morning on the Tuesday. So prompt and early in fact that I was still in my dressing gown when I hazily opened the door with my pre-morning-tea grimace to a massive box that only just squeezed through the door.

Inside was all of the ingredients needed to make the three recipes provided – on individual recipe cards with a break down of specific ingredients, how much was needed of each and detailed instructions of how to prepare each meal. The ingredients were fairly standard which is nice because it means I can make this again. My only gripe is that there was one 175g packet of Basmatic Rice – two recipes called for 150g of Rice but did not state whether this was cooked or uncooked so I presumed they had forgotten to send me another packet. None the less for this recipe I used Bulgar Wheat instead – just in case. It worked just as well and used up some of my dried cupboard food. This probably my favorite out of the three. It was creamy and spicy but packed full of flavours. I think the addition of the lime and the coconut and cashews in this really helped to add some crunch and zing and is something I wouldn’t have thought about putting in a coconut based curry previously. The recipe stated it should take between 30-40 minutes, which is probably right. If you don’t mind spending some time cutting and preparing your ingredients then the rest is mostly stirring and checking. Nutritional values were also provided with each recipe – for this one per serving  they were as follows;

This may seem a lot per serving, but actually is far better than a lot of other meals due to the fresh produce and being packed with delicious vegetables. The other great thing about this meal is that there was enough left over for the day after, so 10 minutes of cooking some more bulgar wheat and heating it through and we’d actually managed to produce 4 meals instead of 2. Day two greeted us with Sicilian Caponata with Pine Nuts and Garlic Ciabatta.

This one was probably the easiest to cook – manageable in just under 30 minutes. Again a lot relies on you chopping the ingredients first, something which I really don’t mind as I tend to prefer my food fresh rather than from a pan. This meal was my least favorite. It was nice and I did eat the whole bowl but it just didn’t tickle my fancy all that much. Probably something I will try to re-invent with a few different ingredient. There was enough for two people this time so we didn’t have any left over for the next day. Something I was pretty glad about.

The lowest in calories and fat, but bumped up a little by the Ciabatta. I was a little skeptical at having only received one Ciabatta roll to begin with, but actually cut in half and then in two was plenty for us both. Day three and our final meal was Escondido Crusted Mexican Rice with Jalapenos and Chipotle.

This meal involved a little more prep – it was advised to cook the rice the night before and leave on a baking tray in the fridge until ready to use which I did. It wasn’t too much hassle really as I simply put the rice on to cook whilst I was cooking the day before. When I said that the Sri-Lanken curry was my favourite – I may have lied. This was most definitely on par with it and I would probably enjoy eating both of them simultaneously for the rest of my days. What really helped is the freshness of the ingredients and again the addition of things that I wouldn’t usually thing of – the wedge of lime to sprinkle over at the end and a dash of corriander to garnish. I absolutely love corriander and often forget how well it goes with Mexican style dishes so since feasting on this I’ve been adding fresh corriander to all my recipes similar to this since!

Again another delicious meal, but with a fairly low calorie count and packed with yummy veg. This also did us for two meals, although I did cook the entire packet of rice so this probably has something to do with it. As well as all of the ingredients for the above meals, I also received a few little extras. An early grey tea bag from teapigs and a £3 off voucher when I spend £25 as well as a pip fruit juice drink which was very yummy.

Overall I’ve had a pretty amazing experience from Hello Fresh. Despite my apprehension at first, I’ve really enjoyed discovering new recipes and have been overwhelmed at how fresh the ingredients were – they all seemed to be organic or sourced locally. It is a little expensive at £36 a box and I could probably have bought most of the ingredients myself for a lot cheaper, but overall I can’t really grumble since everything was already mostly measured out for me and delivered straight to my door and I never seem to visit the supermarket for “tea” without picking up things that I really didn’t need.

Will I try this again? Well actually I did order another box, unfortunately it was lost in delivery, but even this experience was very positive. As soon as Hello Fresh had discovered there was a problem with my box, they e-mailed me immediately to let me know what was going on so I wasn’t left hanging around for a delivery and wondering why the evening’s meal hadn’t arrived. They were also very accommodating and gave me a full refund, kept me up to date with everything that was going on and have arranged for some extra credit to be put on my account for my next box. I’ve really been blown away by the customer service and can’t fault the guys at Hello Fresh one bit! Definitely one step ahead, which made my experience so much more positive.

Each box is delivered weekly, but it’s not like other subscriptions where you have to jump through hoops to cancel or change your box type. Your online account dashboard is super simple to use and you don’t have to have a box delivered every week. Choosing your boxes is very simple and you can pick when you want your deliveries simply by clicking and un-clicking the dates on their handy calendar up to 8 weeks in advance. So if you fancied a box after each pay day, you can do this. You can also see what meals are coming up in the next weeks box, so if it’s something you don’t like, you don’t have to have a box!

It’s not something I can justify doing weekly, but I’ve scheduled in a box every 3-4 weeks and think it’s a great idea to get people excited about cooking healthy meals instead of resorting to overly processed frozen foods.

If you’d like to try Hello Fresh, or simply have a look at what meals they have coming up or what they offer, simply visit their website at Hello Fresh and take a peek. If you’ve already tried Hello Fresh, I’d love to know what box you chose and what your thoughts were!

Totally hellbent for the freshest ingredients and the tastiest new recipes