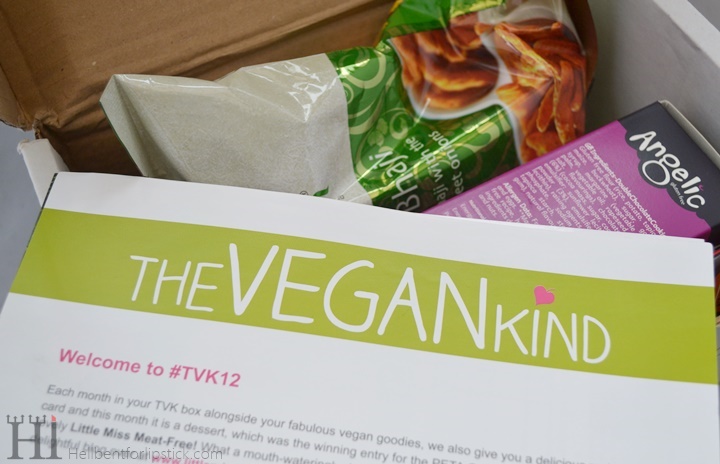 I have a slight confession to make in that I actually received this box about a week and a half ago and I’m afraid that I can’t keep using the “puppy” as a good enough excuse for not blogging more frequently! (Although that is totally the truth) I’ve had a busy month so far in terms of work which is great, but unfortunately this means a few late nights and my inability to want to sit in front of the computer for a minute longer once I’m done, favoring sitting in bed with an early grey and a biscuit. Still, it’s the weekend and I’m so enthused by this month’s box that I have to get this blog out so I devour whats left of the contents!

It’s hard to believe that this is the 12th box and The Vegan Kind have corrected me in saying their official birthday is actually November, but this is still my favorite monthly box and I wouldn’t change it for the world. Each month I receive delicious Vegan treats and a lifestyle extra and not to mention the 10p donation to a good animal charity from each box. This month’s is the Manchester and Cheshire dogs home which is a very worthy cause and I’d already donated a little something a few months ago after the horrific tragedy. So here’s to the twelfth box and many many more and since next month is apparently the official birthday, I hope they have something special planned! What’s that you say? Reduced fat, gluten free, dairy free, wheat free and 75 calories per cookie? YES!!! I’ll admit, after I took my photos (which were pretty rushed due to the bad weather/lighting/work commitments and my inability to contain my hunger) I indulged in one of these. Now we aren’t talking a Millies scrumptiously gooey, warm cookie here, but my gods this is pretty darn good. I would have no qualms eating these for the rest of eternity and by passing all other cookies if I had to. I’ve also been following weight watchers the past four weeks (preemptive Christmas strategy is probably something to do with that too) and I can confirm that each cookie is only 2 Pro Points for those that are interested.

You can get down with some guilt free face stuffing cookies here. Another delicious snack on this month’s menu are these “Onion Bhaji” snacks. Packing quite a punch with each bite, they are a wonderful bit of savory style nom when you are in the mood for … well … “something”. My only downside is the pretty high calories and fat content per 25g serving. (3 Pro Points per 25g serving) so not a packet to devour all in one go and definitely one to measure out in the kitchen instead of taking the whole thing with you.

Check out their range here. I am a fan of no nonsense moisturisers, so a cruelty free moisturiser is right up my street. With added anti-ageing Vitamin A, C and K, I couldn’t ask for more. The sample is a pretty decent size too although I’m not sure I would spend £51 on the full size 15ml version. It feels quite luxurious on the skin and I didn’t react to it at all which is a good thing, so I guess I’ll see how it holds when used on a regular basis.

For more of the premae skin care range, visit their website. I’ve tried some of Landgarten products before – chocolate covered soya beans to be exact and they were very scrummy. I’m therefore holding high hopes for these chocolate covered raspberries. Another snack bound for a workout day but exciting none the less! This seems a perfect breakfast substitute (pre gym of course again due to the high calories!). Being vegan, organic and having a low GI I’m going to enjoy nibbling on this before a intensive workout – although I may indulge in only half of the bar! You can pick these up in a few places including Ocado so I’m bound to see these around. As always with each month’s box, you get a recipe card for your beautiful Vegan Kind ring binder which you now receive on month 6 of your subscription. This month is from Little Miss Meat Free and is a scrumptious looking Ombre Vanilla Dream Cake – definitely something I’ll be making nearer the festive season.

Read more about their product here.

I really take my invisible hat off to The Vegan Kind for successfully delivering such a great box over the past year (almost), each month has been as exciting as the last and I’ve been opened up to so many amazing Vegan products, including the lifestyle items that I never imagined could exist – deodorant, washing powder, washing up liquid and moisturiser to name a few. I can’t wait to see what the future holds for them as I hope they only get bigger and better.

If you’d like to try this box out, you can do so for just £10 plus p&p per month via their website here.

Totally hellbent for supporting such a great box!