A haul full of bargains! 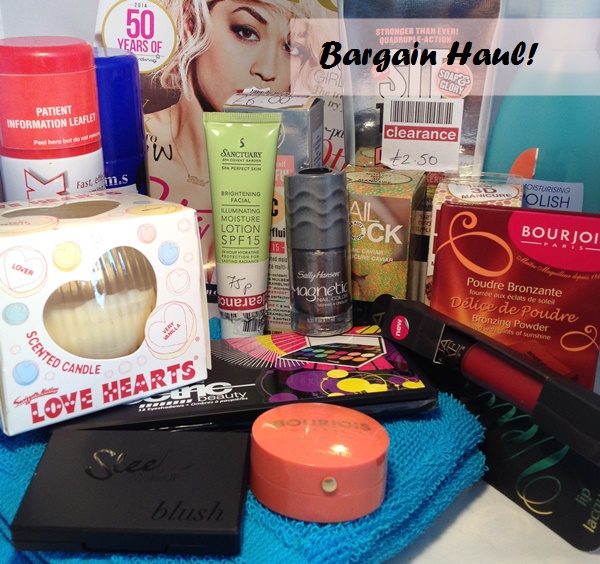 I’m always one for a bargain but I think I got some real steals in this haul!

As always this wasn’t planned…I was just going to look! Then suddenly I remembered I had a boots gift voucher and it all got a bit..out of hand. No regrets though as I already love everything I picked up! My story starts in Superdrug as I decided this would be the day I finally fulfilled my long desire for Sleek’s Rose Gold blusher. Handily enough the Sleek counter faces the MUA counter so it was a no-brainer that I’d turn around and pick something up. I settled on the MUA Luxe Velvet Lip Laquer in Reckless as Amie loves hers in Atomic (reviewed here) and it’s the only thing she’d found that can survive an hour under stage lights!

My next stop was Boots, and how glad was I to have saved my gift voucher from my birthday haul when I spotted the Sanctuary Illumination Moisture Lotion and Soap and Glory CC Superfluid and Sit Tight Intense XS in the clearance section! I also took a swing by the Bourjois counter where I found the light Delice de Poudre (which I’ve been looking for for ages!) and powder blush in 41 Healthy Mix. I can’t resist the bargains in Poundland, and so picked up a Sally Hansen Magnetic Nail Colour in Silver Elements, Nail Rock Nail Caviar in Acid Caviar and Mars some Deep Heat and Deep Freeze style sprays as I pulled a muscle in my Body Combat class earlier in the day (owie!), a Love Hearts scented candle in Very Vanilla and some bright blue face cloths for my gym bag. My final stop was Bodycare where I found my favourite nail varnish remover – Sally Hansen Moisturising Polish Remover – for half it’s usual price and then did a little happy dance as the Technic Electric palette was back in stock!

The best part of all was that (with my £25 boots voucher which covered all the purchases there AND gave me some change!) was that all this came to only £21!

Totally hellbent for all the shinies at a fraction of the cost!