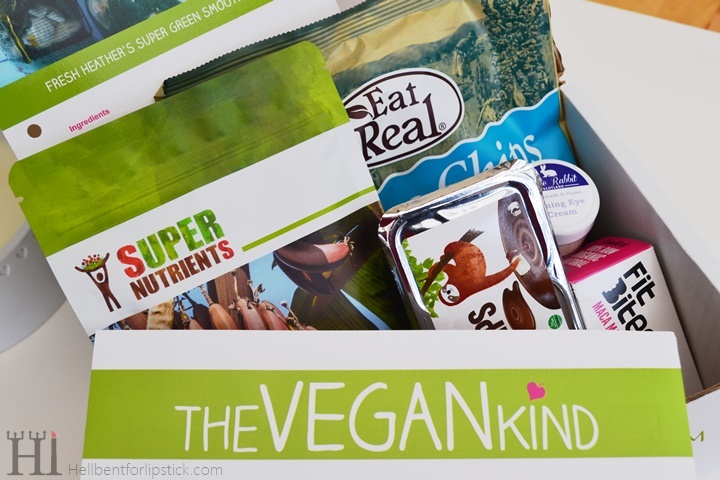 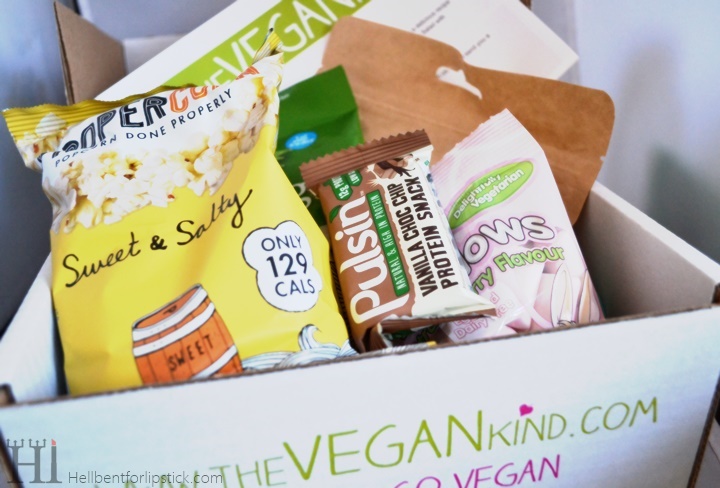 It seem’s like only yesterday I received my last Vegan Kind Box but upon my return from the last camping festival of the year this month’s box was sat waiting for me. A much needed surprise and packed full of treats (as always) to cure the post blues festival feeling and to help purge my body of noodles and tinned fruit!

If you’re new to The Vegan Kind box, we are currently on box 10 of a monthly box crammed full of 100% Vegan treats and lifestyle/beauty products. Each month 10p from each box is donated to a charity picked by subscribers of which this month is the Nut House Hen Rescue. Admittedly one of many reasons for me subscribing to TVK was that their first box had Veggie marshmallows – honestly, for those of you who arn’t Vegan or Vegetarian, you have no idea how much stuff we miss out on! Haribo, marshmallows, chocolate, mousse … the list is endless and why manufacturers feel the need to make their products with animal derivatives is beyond me. Unfortunately I missed out on the first box but have been subscribed ever since, so I was completely stoked when I pulled this out as my first product. They are so delicious that I have already bought two more packets from their website ready for any last minute BBQs we can squeeze in to the British Summertime that seems to be over or failing that Winter Hot Chocolates with Gem & Roode (this is definitely not one I will be sharing with non-veggies … sorry guys). A little on the pricey side, but well worth it.

You can get your fill of Vegan marshmallows here; Freedom Mallows (did I mention gluten, dairy, egg, fat, nut & GMO free?) I’m pretty intrigued by these actually – less than 20 calories per bag and made from Red Pepper and Mange Tout – nothing more. I love finding snacks that have zero artificial flavourings and preservatives and am definitely one for 100% natural eating so I’m hoping these will be tasty. They also have Pea and Sweetcorn and Beetrooth & Parsnip but unfortunately little to none information about where to find them! I love discovering natural, organic & Vegan products for the home and I’m pretty impressed with the size of this one – 20 washes is amazing! Apparently this is the worlds first soapnut laundry tablet and can be used between 30 – 90 degrees. Keep your eyes peeled for a review of this once I’ve cracked them open.

Check out their other products on the Soapnuts Website Ah popcorn – I am definitely one for popcorn at the moment and I’m pretty obsessed with sweet & salty, especially the Propercorn stuff. Although it’s not a new discovery for me I’m very happy at having a packet to nibble on! You can pick these up in most supermarkets and they come in a variety of flavours too. Zero dates! If you’ve read my other Vegan Kind posts you’ll know that I generally end up with some sort of delicious looking protein bar which always contains dates and/or raisins which I just cannot abide by. I don’t know what it is but the thought of eating either doesn’t go down too well with me. This bar has neither and looks to be a nice post workout snack that I can enjoy with little guilt, although it will have to wait a few more days since I’m in the middle of a 5 day juice fast.

For more of their raw protein range, visit their website here This little extra is quite cute, I’m a fan of my wristbands and jewellery especially ones that have meaning behind them, TeenVGN is a social netwrk for young Veggies & Vegans and I wish something like this had been around when I was a little younger and just starting out on my cruelty free quest. Having said that, Gem and I tend to do pretty well and we have a nice circle of friends who are mostly supportive and/or Veggie/Vegan (occasionally we get the odd bacon jokes from the Dakesis boys).

So if you are a younger Veggie/Vegan wanting to find out more information or just some support, visit teenvgn.com and have a look around! Meanwhile, I’ll be pretending I’m still a teenager :oD and definitely ‘repping’ my wristband with pride. As if the above wasn’t already enough, this month’s recipe card was for a Nectarine Salad from Coconut and Berries – another to add to my folder and list of things to try. Once again another superb box from The Vegan Kind, my only issue with finding so many great Vegan delights is that sometimes they aren’t readily available and it makes me a little sad that it’s so difficult to pick up natural, raw, organic and Vegan things in the local shops since people favor processed food too much. Hopefully given time a lot of these companies will branch out.

If you’re interested in subscribing to The Vegan Kind you can do so here via their website. Each box is £10 a month plus P&P.