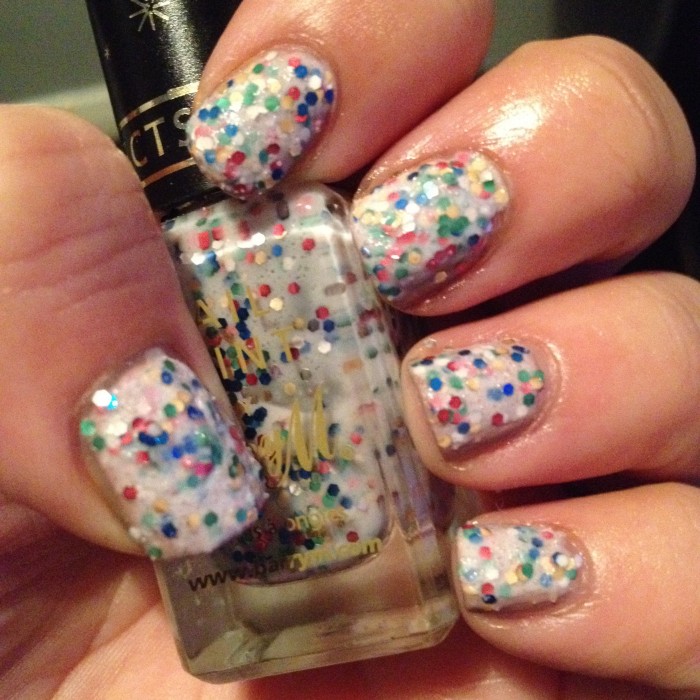 You know when you see something so utterly vile you just have to have it?

I think that must be the reason I picked up this Barry M polish, yet somehow I’m strangely compelled by how garish it is. It literally looks like a clown threw up on my nails and it’s hard to decide if I think it’s the best, or most disgusting thing I’ve seen!

I didn’t use a base colour, and it took three coats to get this coverage, giving the first layer a jelly look. Perhaps this would pull off better with a single coat over a white base, because as it is, it just looks a sticky colourful mess!

Totally hellbent for something unique, even if it is pretty gross! Since Gem and I were struck down with the lurgy (god knows how since we both work from the comfort of our home, away from outside germs!) posting has come to a standstill.

Thankfully, after sitting in front of the PC all week feigning work, with a head feeling as though it is full of tea towels, I finally managed to remove my nail varnish.

I’ve had this diamond sparkle varnish for about a week now, but have been too under the weather to test it out, a sure sign that something is not right! Alas today was the day.

Having seen these in Avon for a good few months now, I have resisted purchasing any until now. The pictures looked so beautiful and glossy and I wasn’t sure if they would really turn out that way. Unfortunately pictures do not do this justice at all, and after two coats I am in love! It’s so shiny and glossy and I think it will come in handy for the Christmas season for many nail art tutorials!

I will definitely be purchasing more of these in future.

The Diamond Sparkle range ranges from £3.00 and can be found online or from  your local Avon rep.

Totally hellbent for painting nails whatever the weather and whilst under or over it!

NOTD: Emagerd nail wraps how do these work arrrghhh! 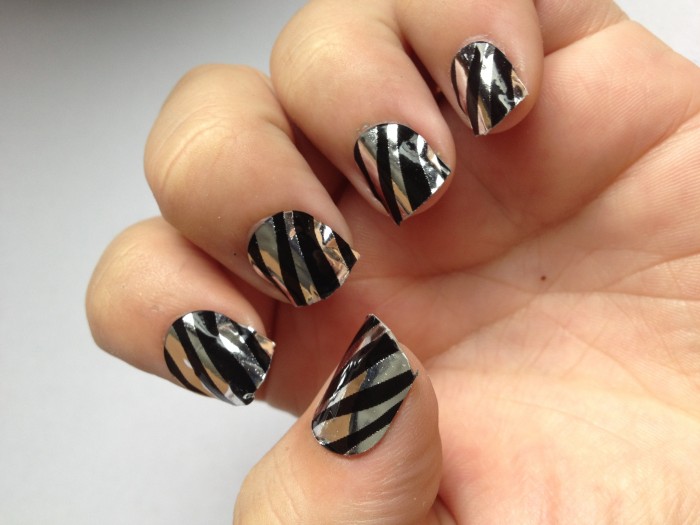 As I sat down to do my nails today I thought…finally….at long last….today is the day I try nail wraps. I have quite a collection building up but I’m always too scared to  try the nicer ones out as they only have one use, and I don’t want to mess that one use up!

I grabbed these disco zebra offerings that I picked up in Poundland ages ago and tried to figure this wrap thing out. Turns out it’s not as easy as it seems! Now I’m going to put this down to both the cheapness of the wraps and my inexperienced application. On reflection I should have trimmed quite a few of them down at the sides to make them fit the nail better – but at least I’ve learned for next time!

I doubt this shoddy application will last the day, but I do feel a bit braver about reaching for the Essie and Sally Hansen wraps in my nail drawer now.

Have any tips for a smoother application? Leave me a comment and help me on my journey to pretty nails!

Totally hellbent for “ooh at least they look shiny and pretty from afar!” I bought this from my latest Avon demo brochue sucked in by the magnetic wands you can also buy, which give you pretty patterns – unlike the others I had seen in shops where it was just a random magnet for you to make your own.

When I first applied it, I left it to dry and then held the magnet over. Well nothing happened and I thought “pah, rubbish.” Due to my own curiosity and a morbid fascination with reading leaflets (boring and weird I know!) it was only when I actually read the instructions that I tried this again. The Avon nail varnish specifically, tells you to apply one coat, allow this to dry and then apply a second, holding the magnet over the nails whilst wet.

Above is the finished product, using the “line” magnet and I am so in love with this, that I even did my toes! It has been a long time since I have been so enthused about a nail varnish that I don’t want to take it off. Usually I can’t wait for it to chip so I can have an excuse to pick another color – I think this is my way of justifying the sheer volume of nail varnish I own and trying to get use out of all of them!

Unfortunately, I can’t link to this just yet, because it hasn’t been released! But if anyone does want the link when it is available to buy online, please let me know. I’m also ordering more colours so I will keep you all posted!

Totally hellbent for nail varnish that I never want to chip Shortly before festival season, I received the Latest in Beauty Ultimate Summer Nails box which Gem and I have been pining after for ages. These were one of the items in the box and in my delirium between Wacken and Bloodstock, I decided to give them a bash.

You get 18 stickers in total and a small emery board/buffer. I had absolutely no idea what to expect, but found there was at least a sticker for every nail that fitted well. It’s a bit strange that you only get 18, which means if I wanted to use these again, I would only get 8 nails done.

As a first timer to nail wraps, I found them surprisingly easy to apply, stick them on and file the edges off. My only issue with this, is that throughout the course of the evening and the day after, my nails felt very rough because the edges of the stickers didn’t come out very smooth. After showering and doing some light house work, this became worse so I applied a top coat. Needless to say, the feeling of scratchy nail tips became so irritating, that I had to take them off after only an evening and mornings wear.

The final result was pretty and I am willing to try wraps again to see if I can refine my technique, only next time it wont be before another festival and definitely after a day of house chores. Despite my first time disappointment, I thoroughly enjoyed just peeling these off, although I used a small amount of nail varnish remover to take some of the residual glue off my nails. I could definitely get used to avoiding the task of varnish removal. Today’s nail is one of my all time favourites. I often struggle to find the perfect “red” nail varnish. They are usually slightly too dark or more of a coral colour. This is one of two nail varnishes which is the “perfect” match.

I am a bit of a sucker for Avon nail varnish. They are super easy to apply and combined with a base and top coat, seem to last for ages for me at least. Plus, they look great next to each other.

My only downside to this varnish, is that Avon gave it a different top so it doesn’t match the rest of mine!

Totally hellbent for the perfect red

NOTD – OPI I don’t give a Rotterdam & Revlon Stunning This was my first OPI varnish and I have to admit it was the name, not the colour that sold it to me. I purchased “I don’t give a Rotterdam” purely on the basis that I missed my boyfriend (who lives in Rotterdam!) and the name cheered me up!

Luckily I found it on Fragrance Direct for £3.99 so managed to grab a bargain with full RRP at around £11.50! It’s a lovely bluey grey with a light shimmer, a really unique shade that I’ve never seen elsewhere. It applies as well as you would expect an OPI shade to, and is quite lovely alone. I decided however that I needed to up the game a little, so added two layers of Revlon Stunning for a little extra va-va-voom! Stunning is a mix of micro and hexagonal glitter that is slightly holographic. I found it in a local Poundland saving myself a few pennies, and it is quickly becoming my new favourite glitter varnish.

Finally a touch of Sally Hanson Clear for take-off to stop that horrible scratchy glitter feeling! This is a great top-coat, both fast to dry and long lasting. You can find it here on Amazon for £6.99.

Totally hellbent for giving a Rotterdam about fabulous nails! 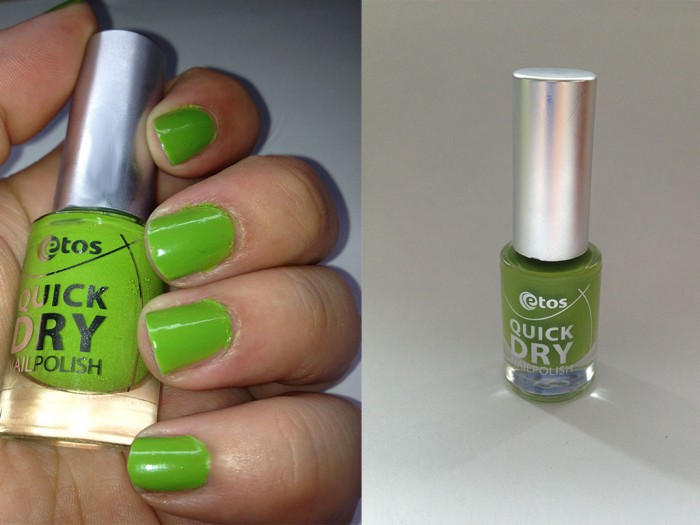 This was a bit of a rushed job on the way to work, but I loved the colour so much I had to do a post (my poor cuticles)!

I picked this up in Rotterdam on a visit to see my lovely other half for the bargain price of €2.50! I’ve got a few of the Etos quick dry range, you could consider Etos to be the Dutch equivalent of Boots and thus this is a bargain own range line.

Downsides? Hrm, well I’m not the biggest fan of numbered shades rather than names but I suppose I can let that slip!

The left hand picture with flash is a much closer to the true colour than the shot on the right without!

I can’t seem to find an online purchase link but you can check out the Etos range here. I’ve been wanting to try out a flake-glitter topcoat for a while, and when I saw this blue tinted one from Avon I simply had to try it.

There’s two coats of Avon Speed Dry in Fast Time Teal as the base (one of my favourites as you can see from how much I’ve already used! I love fast dry nails, as I really can’t stand waiting for them to dry!

The Avon Top Coat in Opalesce didn’t seem to have much pay-off by way of glitter at first but when I pressed the brush down a little firmer I got way more flakes off the brush and onto my nails!

I used two coats of the top coat to get a half jelly look!

Avon nails varnishes are available online or from a local Avon representative.