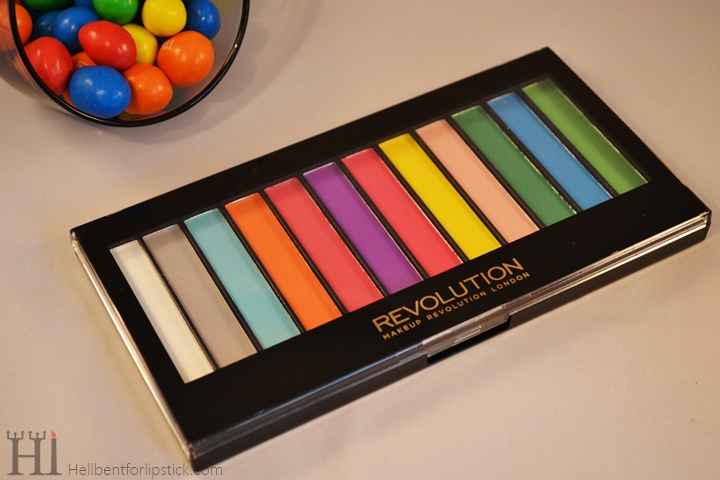 On my first Makeup Revolution purchase, I picked up the Redemption Matte Brights Palette. I have no idea why I was drawn to these bright and crazy colours, but I couldn’t help myself. If you are unfamiliar with the brand, they have hit the beauty world by storm and have rivaled the firm affordable favourite MUA with their cheap yet amazing palettes and fab albeit eccentric lip colours to name a few. I had high hopes for the palette after reading some reviews on their others and couldn’t wait to try some of the shades out. Unfortunately these eye shadows aren’t named but for a palette that only cost me £4.00 for 12 shades I really can’t grumble too much. The first three shades, a white, grey and baby blue were actually very disapointing, I really struggled to get enough, if any, pigment onto my skin as you can see from the swatches above and when I finally managed to build up some colour for the grey and blue it was so insignificant I probably shouldn’t have even bothered. The same can be said for the peach colour which is the 9th swatch along. I was really hoping that me and the grey could get along, but perhaps I can use this in the corners of my eye when going for a smokey black look. I’m afraid that the white was so rubbish, it wouldn’t even work as a highlight.

Now we’ve gotten over the disappointment of four of the shades, we can move on to the others. The orange was actually quite bright, and may even work with a brown/nude eye. It’s not too shocking, but wearable enough to add just a pop of colour. The first pink was darker than I expected, but still gorgeous as was the purple and the second pink, which although was a little brighter wasn’t too dissimilar from the first.

The most surprising shade by far was the yellow which was the most pigmented – I was expecting this to be the worst shade, but I was wrong. Beautifully bright and applied like magic, although I’m not sure when I will ever wear this. As I raved above, the peach was insignificant and hardly worth mentioning, but the first green is stunning, being more of a yellow green, this really does make it stand out, compared to a lot of other greens which often end up a little dull and more of a khaki colour. The blue was also incredibly bright and applied well along with the last green which has even more of a yellow undertone to it. I think these three together with a good blending session could create some very dramatic and amazing results!

Even though some of these didn’t swatch as I’d hoped, I really didn’t buy the palette for it’s exiting white and perfect peach colours, so overall I am impressed with how the palette swatched as a whole, especially given the price tag. It gives me high hopes for some of the tried and tested “safer” shades in the other palettes from Makeup Revolution and I’m really going to make an effort to actually use some of these shades rather than allow it to lay dormant on my dresser. 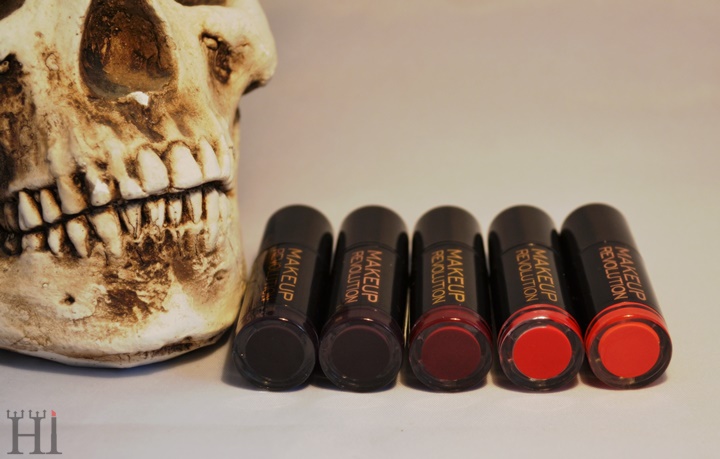 Everyone has been raving about Makeup Revolution and some of their more ‘quirkier’ products. After reading so many great reviews, I couldn’t help but pick a few things out for myself. One of the first things I threw into my virtual basket was the “Vamp Collection” lipsticks, a limited edition set of 3 colours which were £1 each or £2 when you bought the set. I also picked up two others, “Twist” and “Dare” which were only £1. From Left to Right: Black Heart,  100%Vamp, Rebel With Cause, Dare and Twist

I couldn’t resist the lure of these reds and although the two dark shades are probably destined to live on my dressing table for the rest of eternity, rather than escorting me to gigs via my handbag I really wanted them.

The packaging was pretty generic for most of the cheaper high street brands, although I was pleased that each lipstick had a label with the shade on it, as sometimes you are left with either a number or nothing at all.

The swatches were actually more pigmented than I had thought. Both Black Heart and 100% Vamp both appeared much darker, but when swatched, were a lot brighter than I imagined. One of the more surprising shades was “Rebel With Cause” which turned out to be more of a dark Fuchsia colour rather than the blood red I had hoped for. My favourite by a long shot is “Twist”, the one I thought I would like least as it looked more on the orange side, but actually it’s a beautiful bright shimmery red and probably going to be one of my new “go to” red lipsticks. They all applied without issue and with some Micellar water, I finally managed to wipe away the colour, which gives me high hopes for wearing these on stage.

Have you tried any products from Makeup Revolution? If so, we’d love to know your thoughts in the comments below.